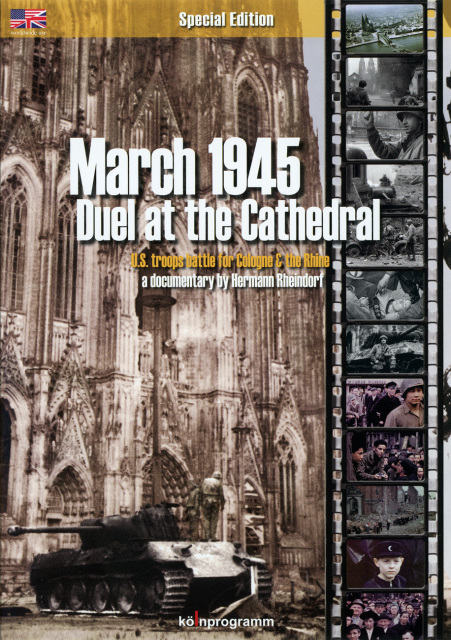 US Troops Battle for Cologne and Access to the Rhine. Previous top secret US Army combat footage is presented throughout this outstanding, historical DVD production…

170 Minutes + 30 Min. Bonus – English-language
Sold out
Add to Cart
In early March 1945, advancing combat troops of the US Third Armored „Spearhead“ Division entered the outskirts of the totally bombed-out dead city. They encountered sporadic resistance from a small number of fanatic followers of Hitler’s brutal „Durchhalte Befehl“, the order to fight to the last bullet. Two days later the US army had reached the banks of the Rhine river. Here, at the foot of the world-famous Cathedral, a dramatic tank encounter took place. Shortly thereafter, the battle for Cologne was over.

Additional Background Information: Eight months after D-Day, US troops are on the cusp of a rapidly nearing, long-awaited milestone, the capture of Cologne and the crossing of the river Rhine. The impending battle has dominated the headlines of the world press for days. Dozens of correspondents (including young Stars & Stripes reporter Andy Rooney), photographers, and cameramen have been closely following the US troops to report in great detail on the unfolding dramatic events.

Based on several years of extensive, painstaking research substantially aided by the excellent cooperation of The Army Archives in St. Louis, MO, the National Archives in Washington, DC, as well as a large number of international source material, the well-known Cologne Historian and producer Hermann Rheindorf also conducted numerous never before released interviews with both German and American surviving participants and witnesses of the fateful tank battle in the shadow of the cathedral.<br><br>